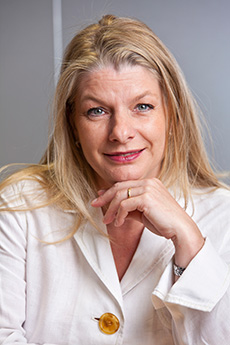 A French expatriate herself, Marie-Hélène Wood knows exactly what it takes and how it feels to relocate and orient yourself to a new country – especially when there are children involved!

From her roots in South of France- Provence, Marie moved to Lyon in the late 80s to study economics. Her tertiary academic qualifications include a second business degree in European Commerce and Distribution.

In 1994, while living in Nantes, her husband was transferred back to the UK where the couple lived for a year. In November 1995 the family was again relocated to Russia where they remained until 2002.

During this time period, Marie co-founded the first relocation company to be based in Moscow. In 1998, Marie Hélène moved to the consulting environment, assisting blue chip brands with large scale executive relocations projects.

Marie-Hélène relocated to South Africa in 2003 for 3½ years with her husband, Michael and their small children. It was with a heavy heart that the Woods left in 2006 to take on a short assignment in Brussels.

In January 2008, the family relocated back to South Africa in order for Michael to take up new executive position, and decided to settle permanently in South Africa at this time.

Together with her intellectual foundation and business savvy, Marie’s extensive experience as an expatriate qualifies her to be a firsthand relocation specialist. Having always been involved in welcoming people, she has continued to follow her passion for relocation of executive families by launching Rockstone in 2010.

Marie Hélène has also initiated and co-founded the Dainfern International Social Club to provide expats with a social network in Johannesburg. The club, which currently comprises of around 200 families complements the Rockstone offering. In everything she takes on, Marie Hélène’s belief in “going the extra mile” and the ‘power of now’ drives her success.